Once is a story, twice is a trend 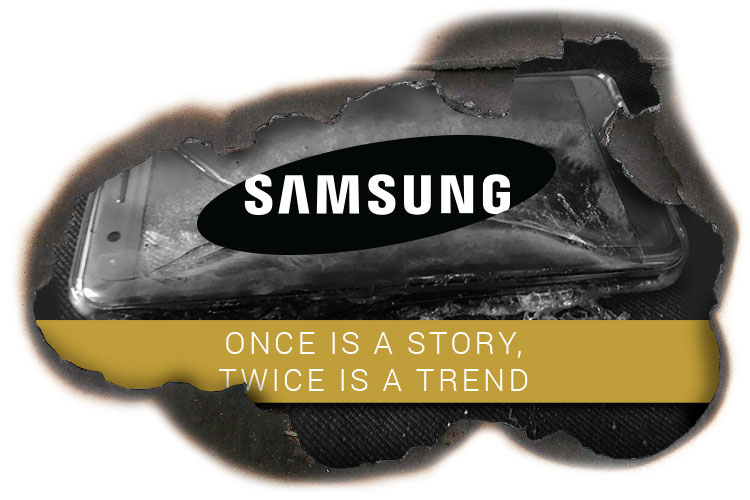 The damage to a brand happens after the second news story, and Samsung experienced this first hand.

When one bad news story happens to a brand, that is all it is, a story. Most marketers and small business owners overestimate the potential damage to a brand due to a negative story that gets picked up by the media and shown to their potential customers. As we have seen in our recent article on digital security and brands, a brand’s ability to do business was not adversely affected by news of data breaches even though the consequences are severe for both the company and the customers.

I remember back to finite mathematics; a point was only a point. A single spot defined in space. But if you have two points, the possibilities greatly expand. You can connect the two points and form a line. You can project the line back before the first point and forward past the second point. In other words, two points make a trend.

Customers think similarly. Customers dismiss one news story; bad things happen, and customers do not think much of it as long as the company went above and beyond to rectify the situation.

But two news stories in quick succession allow customers to assert a trend. They project the trend into the future and predict more negative events in the future, and they want to disassociate themselves from the brand. This assertion happens even if it is unfair to the target company.

The brand damage of two news stories affected Samsung after the news story of exploding Galaxy Note 7s (The Verge) was followed by a news story of “exploding” Samsung top load washing machines (CBC). These are two stories that would be benign by themselves, but the combination damaged the Samsung brand.

Samsung was handling the exploding Galaxy Note 7 situation well for awhile. On August 19, the premium smartphone launches in the US to rave reviews. On September 2, Samsung recalls all 2.5 million phones by their accord. On September 15, the US Consumer Product Safety Commission issued the formal recall, and quickly after that (on September 16) the FAA disallows Samsung Galaxy Note 7s to be turned on or charged on airplane flights.

The FAA decision was damaging to Samsung’s brands because flight attendants announced that people’s Samsungs could not be used or charged before boarding, and there were reports that the attendants were discriminating against all large Samsung phones beyond the model affected. This targeted travelers, who are affluent and on the go: the specific market for high-end smartphones. It hit Samsung where it hurt; nothing it could not recover from, but it stung. The FAA warning hit Samsung where it hurts: affluent travelers.

On September 23, Samsung pushed an update to keep phones they believed to be from the “bad batch” from charging beyond 80% and displaying a warning to urge users to replace the phone. Samsung seems to be acting responsibly.

Then it went downhill for Samsung: the “exploding” washing machine story came out. On September 28, a class action lawsuit was filed against Samsung claiming that washers “exploded” by vibrating themselves into destruction and causing property damage in the process. “Exploded” is in quotes because the term brings to mind a bang and fire, which was the case with the phones but the washers violently vibrated themselves apart. Same day as the lawsuit, Samsung issues a statement that top loading washers manufactured between March 2011 in April 2016 “may experience abnormal vibrations that could pose a risk of personal injury or property damage when washing bedding, bulky or water-resistant items.”

The phone situation deteriorated further. On October 7, a man’s replacement phone catches fire on a Southwest flight. In the aftermath, a representative from Samsung accidentally text messaged the man believing he was messaging a colleague and the text message implied they were attempting to keep the story quiet. Shortly after, two more customers report replacement phones catching fire, sending one man to a hospital with acute bronchitis from the fumes. Samsung itself issued a statement that five replacement phones had caught fire within a week.

Some of the carriers and retailers, starting with AT&T, stopped selling the phones. On October 11, Samsung pulled the plug entirely. Production of the Samsung Galaxy Note 7 was discontinued, and people will not be given replacements and instead get refunds or cash incentives to take other Samsung products.

Three stories allow customers to assert a trend about Samsung. Firstly, Samsung put out a phone that exploded, and this would have been fine if that was where it ended. But secondly, Samsung washing machine exploded, and lastly, Samsung replaced the phones with still dangerous phones. This ordeal is devastating to Samsungs brand. Analysts are estimating the cost to them to be upwards of $17 billion dollars.

“The timing could not be worse.”

The timing could not be worse. The iPhone 7 Plus and the Google Pixel XL launched at the same price as the Note 7, and many refunded customers will go to other brands. The whole story is particularly damaging in China where Samsung continued with the launch of the phone even when they were being recalled in the US, and the phones there caught fire as well. Samsung and Huawei were in a race for the Chinese high-end smartphone market.

If you are managing a brand, take lessons to avoid Samsung’s mistakes. If a negative story about your brand turns into a media or viral disaster, do not worry. Responsibly do what is right to rectify the situation of the people affected, and constantly communicate to the public what you know and what the company is doing about it. If you attempt to salvage sales or keep people in the dark, a second news story will develop and that will be the one that will damage your brand. There is a famous saying: “it’s not the crime, it’s the cover-up.” This is true because the cover up is the second story.

Worry about the second news story; that is where the damage is done.